From My Wife’s Point of View 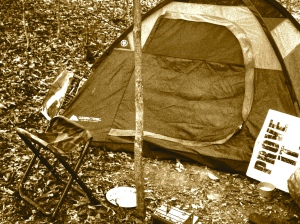 A few days ago, I asked my wife if she’d share her perspective. This is her response:

My husband Kenny was homeless for a while in ’96, while going through a divorce and trying to keep his business afloat. You’d think that one such experience would be enough for anyone, but last summer, in an attempt to give a face and a voice to the “invisible” population that is the homeless in our community, he lived as they do for two weeks. This year, he felt God nudging him to once again spend some time without a roof over his head. Two days ago (a week into the assignment), he came home for a visit.

We decided when he first ventured out that we’d set aside Sunday to see one another and catch up. I’d pack a picnic, and the dog and I would meet him near his camp so we could all take a walk and eat lunch together. But the weather didn’t cooperate. So, rather than sit in the rain or try to squeeze all three of us into his tent, we decided he’d come home. So as not to exploit the situation, we’d sit on the porch rather than in the warmth and coziness of the house.

Once I knew he was on the way, I straightened up the porch, even setting out some candles. Back in the house to retrieve another match, I caught a fleeting glimpse of Kenny through the front window. Feeling suddenly like a teenager with a crush, I opened the door to greet him.

I wasn’t prepared for what I saw.

Let me interrupt myself here and say that there’s a look, a demeanor, that the chronically homeless have—but it’s more than the obvious. In fact, after you’ve interacted with the homeless long enough, you’ll spot “the look” even in those who go the extra mile to maintain their appearance, because it goes far deeper than the external.

Kenny had “the look.” What I saw as I peeked out our front door was a man who looked like he’d been on the streets for a very long time.

Granted, there were the obvious things: he was dressed in layers against the rain—stocking cap, raincoat, sweatshirt, T-shirt, and overalls. His shoes were soaked, and from his left shoulder hung his backpack, loaded down with essentials. His eyes and mouth were tight with pain as he gripped his cane and hobbled toward me with short, faltering steps.

Then there were the less obvious things—namely, the deep, vast heaviness in his eyes. He was clearly carrying burdens that had nothing to do with the gear in his backpack.

It’s nothing new for Kenny, who’s a bit rough around the edges and has never shied away from hard work, to look a little scruffy or exhausted. As a sound engineer, he has worked impossibly long and difficult gigs in brutal weather. I’ve seen him dazed from lack of sleep, and bone-tired from many hours of physical labor. But this was nothing like that. I realized I was seeing Kenny with what the Bible calls the eyes of my spirit. Here was a battle-scarred warrior. God had allowed one week of homelessness to affect Kenny exponentially and at an accelerated rate. As Director of Manna Cafe, he can’t “disappear” indefinitely, so God is ensuring that he feels the suffering of the homeless and identifies with their plight in just a short time. After all, suffering breeds compassion. The Lord allows it “so that we can comfort those in any trouble with the comfort we ourselves receive from God” (2 Cor. 1).

A few skeptics have remarked that Kenny’s experiences in homelessness are nothing more than camping trips. If only that were true! He would never have ventured out right now if he didn’t feel compelled by God. In the natural, the timing was bad. There’s a great deal going on at Manna Cafe. Kenny has been burdened mentally and emotionally by some important issues. Then he spent his first day of homelessness with a stomach virus, and sleeping on the ground has been ruthless on his back. He can’t stand or exit his tent without a cane in each hand. He’s also withstood spiritual assault—the sort that’s overcome only with obedience and prayer. 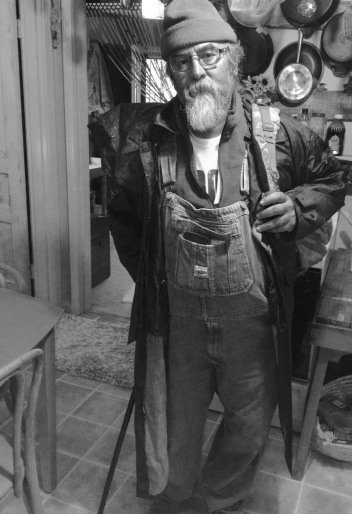 For a long, painful moment I could only stare at him. Then I made the poor guy stand there for a moment longer as I snapped a photo because I didn’t want to forget what I was seeing. Finally, I wrapped my arms around him, and he relaxed.

And then he wept.

This would continue throughout the day: his voice would catch, or a tear would randomly roll down his cheek. At first, he was baffled and frustrated by his runaway emotions, but I knew there was more to it than either of us could comprehend. He realized that the weight and weariness he’d felt while praying and walking the streets of Clarksville, or crouching in his tent at night, had been less about back pain and falling temperatures than it had about spiritual warfare.

As Kenny shed his outer layer and changed his shoes, he looked around the room and said, “It looks good in here,” as though I’d painted or redecorated—or as though he’d been gone for months and had forgotten the details of the room. We spent the next hour or two wrapped in blankets and picnicking on the back porch. I caught myself not just watching but observing him. There are little gestures and nuances that belong to the homeless, and—once again, what should have taken weeks or a month had taken seven days—Kenny had already adopted a few of these gestures: the way he maneuvered a piece of smoked fish into his mouth with his fingers, the way he uncapped a bottle of water with his teeth.

I also noticed that Kenny seemed slightly out of place… but not because of his demeanor; we’ve had many homeless people in our home, and some have lived with us, but this was different. On one hand, he had all but melted into the seat, like one who finally feels safe after a harrowing experience; but on the other hand, it seemed he wasn’t allowing himself to truly be at home, or to separate himself from his camp and from the state of homelessness. He was there with me—but not quite. I was reminded that homelessness is not just a geographical condition but a state of mind.

“This doesn’t feel like your home right now, does it?” I asked.

“It feels foreign,” he admitted. “I feel out of place, like I don’t belong here.” Like many wives, I want my husband to feel like a king in his castle, so I was tempted to fly into action to ensure he was completely settled and comfortable—and present. But the Lord deterred me: This is how it has to be; he’s not finished out there yet.

We nibbled on grapes, talked, and watched our dog, Annie, play in the rain. At one point, she did something silly, and Kenny burst into laughter. For a moment, as he tilted his head and the corners of his eyes crinkled, I caught a glimpse of the Kenny who is a devoted husband, a prophetic musician, and a visionary who said yes when the Lord told him to feed the hungry. An instant later, he was gone, and the weary homeless man had returned. Back and forth it went for a few minutes, like the novelty collector’s cards we had as kids that shifted from one image to the other when we tilted them. I’ve said many times that we’re all just a hair’s breadth away from homelessness ourselves, but now, as I watched this vagabond who was also my strong and steadfast husband, I realized that the reverse is true as well. Underneath it all, we’re all the same.

Ours is a “hippie house,” which means we have a swinging bed on our porch, so when Kenny’s eyelids started to droop, he lay down and immediately feel into a deep, luxurious sleep. Several hours later, he woke and ate again, then allowed himself the extravagance of a shower. Too soon, it was time for him to go.

Needless to say, it was painful to watch him leave. But my consolation is that even as the Lord is allowing Kenny to be tested, His ways are perfect. Out of the weight that Kenny is carrying will come something priceless. As someone has said, “There is nothing heavier than compassion.”

You have Successfully Subscribed!